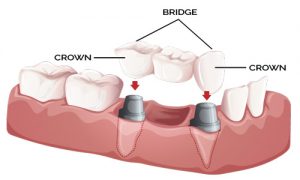 Dental Implants are a great and effective way to replace a missing tooth or teeth. A dental implant is a titanium post that is surgically placed in the bone under the tissue (gums). The last step after the healing process is a custom-made crown that looks just like your other teeth.

Benefits include keeping bone from shrinking, a secure fit and comfort. Because dental implants can replace a single or multiple teeth there are many options including single crowns, bridges and dentures.

This treatment can take longer than other options but with proper care can last a lifetime. Talk with Dr. Sherry Powell to see if you’re a candidate for dental implants to replace your missing tooth/teeth.

One of the major benefits of going for dental implants is that it would behave just like your natural teeth. This would mean that it would also restore full chewing power. In fact, most of the patients who have come to Dr. Powell would not even be able to tell the difference between their implant tooth and natural teeth. They would be able to eat with it completely normally, aside from brushing and flossing.

In the case of a dental bridge being a solution for missing tooth, this would last you around five to ten years. On the other hand, if dental implants would be placed correctly, then it would be able to last you a lifetime. This is because the implant would be made from titanium and then integrated in to the jawbone. It would also be bio-compatible which would that it would not be harmful or something which would be rejected by the body.

When a tooth would be left missing for a long time, then the jaw bone in the empty space would tend to deteriorate due to lack of stimulation. So, if no implant would be placed within the first year or so, then the bone area would lose at least 25% of its volume. This is something which would then continue over the years. As a result, dental implants would keep the jawbone stimulated and would also help to prevent bone loss.

A bridge would consist of a false tooth or teeth that would be supported by adjacent teeth that have been capped. This would also be used to replace one or two missing teeth. In addition, a bridge would often require two healthy teeth to be altered which might not always seem to be ideal. In the case of a dental implant, this would not be required.

In addition, bridges have also been known to have a relatively short life span of five to ten years, compared to an implant which could last you a lifetime.

Therefore, even though bridges might seem to be economical at first, it would actually be implants that would be benefitting you in the long run.